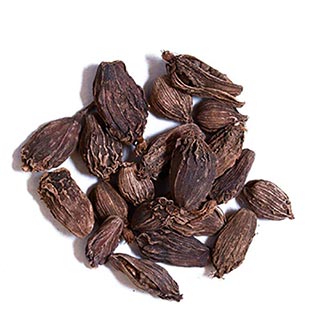 Nepali large cardamom (Amomum Subulatum Roxburgh.) – also known as ‘black gold’ or ‘black cardamom’ and locally called alainchi – belongs to the botanical family called Zengiberaceae. Large cardamoms are spindle-shaped pods that are light to dark brown in color. The pods normally vary from 20 mm to 35 mm in size and contain several black seeds inside with a spicy aroma. It is an evergreen, perennial and herbaceous plant grown on north-facing hill slopes. The plant is sensitive to climate and requires temperatures of 15–25 degrees Celsius. It also needs humid conditions and shade and grows between 800 and 2,100 meters.1 Plants survive for 20 to 25 years. They start fruiting from their third year and mature at 8–10 years, with a full fruitbearing period of 17 to 22 years. This type of large cardamom is grown mainly in the Himalayan region of Nepal, Sikkim in India, and Bhutan.

For centuries, cuisines in families South Asia have used large cardamom for its smoky flavor in their traditional dishes as a symbol of wealth. Compared with the green variety, large cardamom has a very distinct roasted smell and taste, and brownish color, which originates from an ancient drying method. Nepali black cardamom has a distinct flavor profile due to a specific method of postharvest drying in Bhatti ovens, which explains the roasted smell and taste. The smoky flavor would overwhelm a sweet cake or pudding but in a spice rub for roasted meat or in a full-flavored stew it imparts a smoldering depth no other spice can.

Large cardamom is the second-largest export commodity and the largest agro-based export of Nepal. Between April 2015 and March 2016, Nepal exported USD 46 million worth of large cardamom putting it only behind handmade carpets as the largest export of Nepal. According to the Ministry of Agriculture Development, in fiscal year 2014/15, the total trade volume of large cardamom was 4,470 tons valued at NPR 7,179 million. Large cardamom is grown predominantly in Eastern Nepal where four districts Taplejung, Panchthar, Ilam, and Sankhuwasabha account for more than 80% of national production. It is believed that around 60,000 – 70,000 families are involved in cardamom production. In 2014/15 the highest production (27% of total output) was recorded in Taplejung district, followed by Sankhuwasava (21%), Panchathar (12%), Ilam (10%) and Khotang (8 %), with the remaining 22% from other districts. It is estimated that around 66-70000 households are involved in the production of large cardamom all over Nepal.

Specification of Characteristics of Large Cardamom (whole) in India

Specification of Characteristics of Large Cardamom (seeds) in India