DoC introduces ExIm code for traders
The Department of Customs (DoC) has introduced the Export-Import (ExIm) code for traders from today on the occasion of the 65th International Customs Day. All exporters and importers must obtain the ExIm code by the end of this fiscal to be eligible for export and import from next fiscal.

The Department of Customs (DoC) has introduced the Export-Import (ExIm) code for traders from today on the occasion of the 65th International Customs Day. All exporters and importers must obtain the ExIm code by the end of this fiscal to be eligible for export and import from next fiscal.

Traders can obtain the ExIm code by submitting their details and bank guarantee slip of Rs one million. However, exporters do not require the bank guarantee. Likewise, import and export firms must have paid-up capital of Rs two million.

Traders can raise the paid-up capital of their firms by the end of this fiscal, however, the bank guarantee is a must while obtaining the ExIm code. 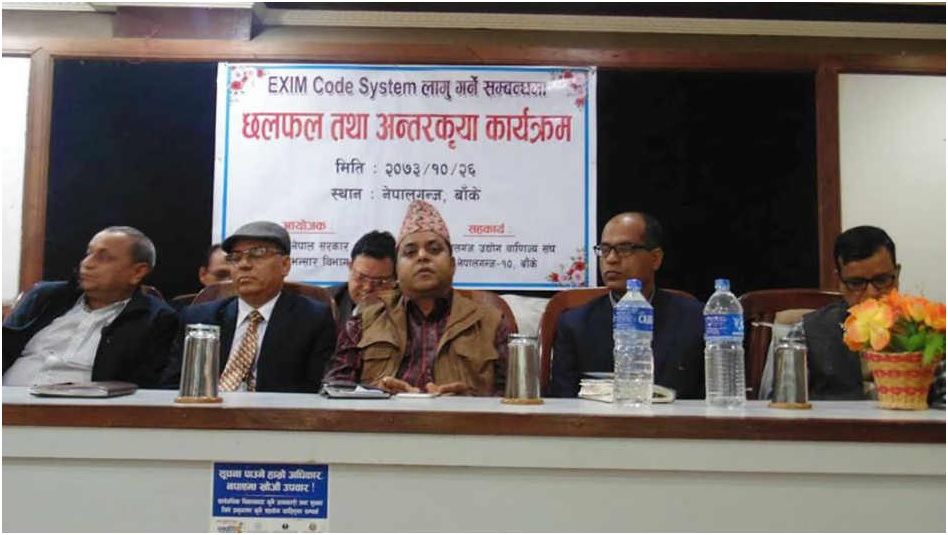 ExIm code has been introduced for trade facilitation, according to Sishir Kumar Dhungana, director general of DoC. “This is one of the reform initiatives of the customs, which will facilitate trade by digitalising Customs Transit Declaration (CTD) at Kolkata port and Visakhapatnam port because we have been preparing for electronic data interchange with Indian customs.”

Likewise, DoC has introduced the next phase reform plan of Customs Reform and Modernisation Strategies and Action Plan (2017-21). The CRMSAP (2017-2021) was developed based on the provisions of the Revised Kyoto Convention and World Trade Organisation’s Trade Facilitation Agreement (TFA).

As a party to the Revised Kyoto Convention, the country needs to develop uniform customs practices and procedures like in other countries that are party to this convention. The reform initiatives in the customs is expected to benefit many stakeholders — both government and private sector.

Traders will benefit because of improved facilitation and reduced costs. Likewise, shippers and transport operators will benefit from uniform customs controls and quicker movement of cargoes and people. The government will benefit from more effective controls that will increase border security and reduce revenue leakage. Overall, the modernisation and simplification of customs procedures under the Revised Kyoto Convention is expected to provide predictability and efficiency to international trade.

DoC will formulate an annual plan based on the CRMSAP and execute it from next fiscal 2017-18. It will be able to implement the ‘single window’ system from next fiscal as part of the customs modernisation. Reportedly, this system would interlink dozens of agencies involved in customs procedures like quarantine, banks, tax offices and customs agents, among others within 2021. Customs lab strengthening and interface among labs of Department of Food Technology and Quality Control and Nepal Bureau of Standards and Metrology and customs are other major priorities of DoC. Similarly, CRMSAP has also envisioned streamlining coordinated border management agencies to provide effective service to traders and passengers.

The DoC has sought Rs 10.17 billion to implement the CRMSAP (2017-21), which is expected to provide necessary impetus for the growth of international trade.