Home Contents News Around 50,000 he-goats, sheep to be brought in Valley for Dashain 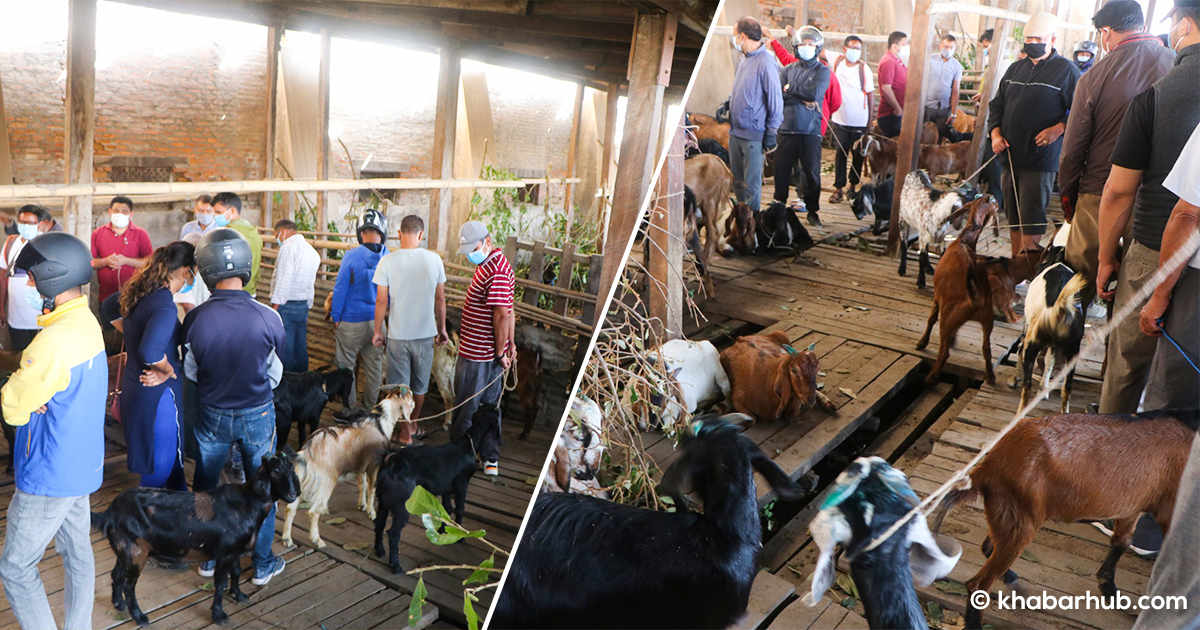 Around 50,000 he-goats, sheep to be brought in Valley for Dashain

KATHMANDU: Every Dashain the demand for meat scales high in the country. Kathmandu valley imports more than 50,000 extra sheep and goats for meat targeting the festival.

Ghatasthapana, the first day of Dashain falls on October 7, this year. The traders have started discussions to import male goats from around the valley and Himalayan region.

Livestock Traders Association has started calculations for the number of livestock to be imported for the festival.

“Discussions are underway to find out how much to bring,” said Yuvraj Parajuli, general secretary of the Association, adding, “around 35,000 livestock will be brought for the purpose initially.”

According to him, about 50,000 he-goats and 8,000 Himalayan goats and sheep used to be brought to Kathmandu from different districts of the country and India, China, and other countries previously.

The association is preparing to build a central market in Dahachok of Chandragiri Municipality from this year. “The livestock including local and Himalayan goats and sheep brought from outside the valley can be found in the central market,” said Parajuli.

A model market is under construction in around 17 ropani of land.

For Dashain, the Food Management and Trading Company Limited (FMTCL) has planned to bring 3,000 livestock in the valley. The company had bought and sold 1,400 Himalayan goats and 1,600 he-goats last year.

“We are preparing to bring 2,000 Khasi-boka (castrated and non-castrated male goats) from Tulsipur and Hetauda,” Sharmila Neupane, the information officer of FMTCL, told Khabarhub.

She said that the company buys from farmers every year and sells the livestock in the market at a discount from the market price.

The FMTCL has opened a discount store for the festival on September 17.

Especially for Dashain, Tihar and Chhath festivals, the discount shop has been brought into operation. It is said that you can get salt, rice, sugar, beans and even meat at discounted prices in such shops.

Similarly, mustard oil, sunflower oil will get Rs 5 per liter and soybean oil, Karnali bean will get Rs 10 discount.

A discount of Rs. 10 per kg will be given on Himalayan and other goat meat. The company had facilitated an online delivery service during the lockdown.

“The service was removed after the lockdown, but now goods will be delivered to those who order online during the festival,” Neupane said.

According to her, discount stores have been started in 43 places in 39 districts. Shops have been opened in Thapathali, Ramshahpath, Nakhu, Lagankhel and Suryabinayak in Kathmandu Valley.

Outside the valley, shops have been set up in Nepalgunj, Pokhara, Dang, Surkhet, Dhangadhi, Mahendranagar, Banepa, Hetauda, ​​Narayangarh, Bhairahawa, Butwal, and Dadeldhura.

Along with the FMTCL, Salt Trading Corporation is also preparing to operate 43 discount stores.